* In case of any delay in receiving the OTP, you may verify it later. Please proceed without verification.

Enter your City name or Pincode

The city of Bhabua in Bihar is located between the coordinates 25.0500° North latitude and 83.6200° East longitude. It is one of the most fast developing cities in the state and is a major commercial and educational centre. It is also considered to be the world’s first green city, as the buildings and other structures here are painted green, spreading the message of love and universal brotherhood. This along with other factors like its strategic location, easy accessibility and availability of various services are slowly but steadily contributing in making this place one of the most happening destinations in Bihar state. 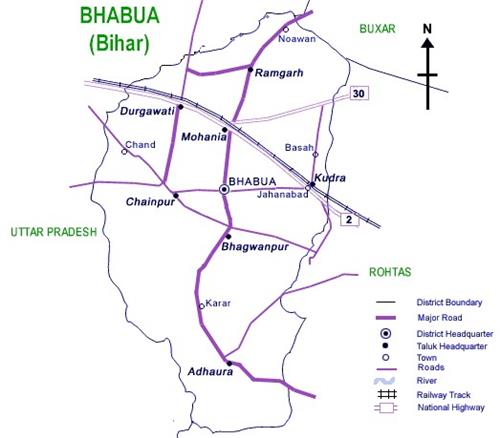 Bhabua city faces extreme climate, with hot summers and cool and pleasant winters. January is considered to be the coldest month, with temperatures dropping to as low as about 4o C. The temperature is high during the months from March to May, and May is the hottest month here, with temperatures as high as about 45o C. Rainy season here lasts from mid-June to mid-September, and the pattern of rainfall here is highly unpredictable. At times, Bhabua gets winter rainfall during the months of January and February. An ideal time to visit this place therefore would be during the months from October to March, when the climate is relatively pleasant and you get to enjoy sightseeing as well as participate in various fairs and festivities held here during this period.

The city of Bhabua is the headquarters of Kaimur district and has an undulating topography, with highly uneven slope. Located at an elevation of about 86 metres from the sea level, this city is the headquarters of Kaimur district. It is surrounded by the district of Buxar in Bihar and Ghazipur in Uttar Pradesh to its north and Garhwa district of Jharkhand state to its south. The districts of Chandauli and Mirjapur in Uttar Pradesh are to the west of Bhabua, while Rohtas district of Bihar is to its east.

Business and Economy in Bhabua

Agriculture is the major source of revenue for the people living in Bhabua. This city is surrounded by dense lush green forests. Rice, wheat, bamboo, mangoes are some of the main crops grown in this region. Many steps are being taken to develop and improve the state of agriculture, animal husbandry and allied occupations in this region. As there are numerous tourist destinations in and near Bhabua, various infrastructural developmental activities are being undertaken by the government to promote tourism to its optimum here. Steps are also taken to promote the development of small scale industries, self-help groups, weavers and artisans in Bhabua and thus to bring about an overall improvement in its economic status.

Comments / Discussion Board - Geography of Bhabua